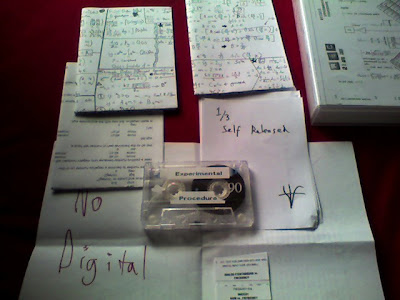 I realize this isn't a great picture, but the batteries from my camera are dead at the moment and you won't find any other pictures of this releas on the web because it is super rare!
If Dotåbåtå wants this removed, I totally understand, because he only made three copies (as far as I know) and he released it myself. I could however tell you this is nothing like the original cassette, as I don't have very good equipment to rip cassettes to mp3's, and it all comes out mono as wel.
I realize that he specifically said "No Digital" on an inserted paper, but hey, what can I say. It's not that I myself will listen to this on my computer, I'll use the original cassette, but this blog is all about sharing music and I don't want to make duplicates of this cassette and distribute them myself, that would be even worse than what this pirate's doing..